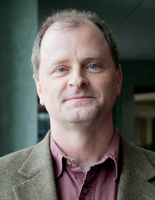 As someone who studied microelectromechanical systems and diode lasers in graduate school, took a company public with godfather of telecom startups Milton Chang and now works full-time while running his own company creating solar cells under contract with NASA, Mike Nesnidal is not your typical business school candidate. But with an end goal in mind of starting another company or furthering his current one, Nesnidal is eager to gain a new kind of knowledge in the entrepreneurial track of the Evening UST MBA program and apply it to his future.

Hailing from inner-city Chicago, Nesnidal obtained his B.S. in physics from Lawrence University in 1989 and moved on to study materials science at the University of Wisconsin-Madison, working up to his M.S. in ’92 and Ph.D. in ’97. From there, Nesnidal went to work for TRW Inc. (succeeded by Northrup Grumman and Goodrich Corporation), a space systems company in California. He had developed high-power, III-V diode lasers for his Ph.D., the kind of technology used for optical pumps in optical fiber systems used to support Internet traffic, which helped keep signals going across the country and the ocean. At TRW, Nesnidal’s work was related to that, but for defense applications.

After TRW, Nesnidal had the chance to work for Chang – a man so big in the sector who, according to him, “would pack auditoriums in technical conferences for how you start a company.” Nesnidal moved back to Madison to work in the research division of a company Chang had started called New Focus. But he left New Focus a year before the company went public, choosing to join another start-up, this one founded by a former professor and fellow grad student, involving the same type of laser he had studied for his Ph.D.

This company, called Alfalight, received $44 million in three rounds of funding over the first two years of operations. Nesnidal was essentially the first person with the company, recalling: “First day, we went to Best Buy and bought a computer and put it on a card table and an incubator site on campus, and we watched that grow to 70 people.” The company got its last round of funding right before the telecom and dot-com bubble crashed, survived on the money for a few years, but eventually cut its research and development arm and Nesnidal with it. Not long after, Nesnidal came to Goodrich, now UTC Aerospace Systems. Today he manages a research group developing MEMS.

In 2008, Nesnidal had learned about opportunities with government programs called Small Business Innovation Research/Small Business Technology Transfer (SBIR/STTR). “Essentially they’re government funding through various agencies to fund research involving a small business, which has definition to it, and either a research, university or research institute,” he said.  He started his own company, Firefly Technologies, out of his house with his wife, who has a Ph.D. in atomic physics.

The company develops nano wire-based solar cells for space-based applications. He explains: “When you’re outside of our atmosphere, there’s a lot of radiation that wreaks havoc on electronic devices, so whenever you’re on a satellite, you need something that survives radiation, and you need to be sensitive to the wavelength range that [the cells] are looking for.” Nesnidal develops the theory while his collaborators fabricate the actual devices.

“SBIR/STTR opportunities are grouped into Phase I and Phase II grants and the idea is to develop technology so that it can be made into something useful for government agencies. We applied for a couple Phase Is with NASA, and one of those turned into Phase II.” Besides providing greater funding, the grant is also longer term, signaling that the technology is considered viable and that the government wants to see the next step. Firefly is now finishing Phase II and Nesnidal is partnering with that same friend, now an assistant professor at the Rochester Institute of Technology and the University of Wisconsin.

So after his decade-plus whirlwind ride through the world of technology and science, what brings Nesnidal to the UST MBA? “I’ve worked on a lot of things on a pretty involved level that could’ve used some of the things that they teach you [in business school], so in some cases I think I’m an example of what not to do and I want to turn that into an example of what to do,” he said. Nesnidal chose St. Thomas’ applied business program over the University of Minnesota’s more theoretical one. “I don’t really want to sit and read a book,” he said. “I want to learn from people who have been out there.”

Ethics and the Economy