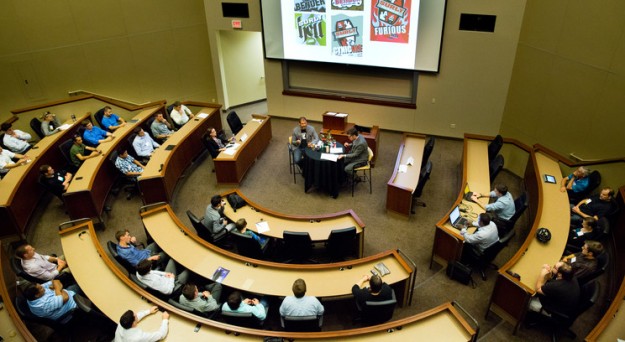 When Omar Ansari visited Minnesota liquor store shelves prior to 2006, he found very little craft beer. Fueled by a passion to “make beer for people who don’t know they wanted it”, he retooled his family’s abrasives factory into a brewery and spearheaded a bill to allow on-site pint sales at breweries.

Ansari, founder of Surly Brewing Co., teamed up with Opus College Prof. Alec Johnson Aug. 14 for an “Intersections” that double-fisted business practice with its theory.

As an incoming Evening UST MBA student, the mix of Ansari’s success story buttressed by Johnson’s research in entrepreneurship offered an intriguing taste of what distinguishes a MBA from undergraduate studies.

Sure, I’d experienced this on campus before: a couple of guys, drinking beer, telling tales to a student-filled room. This go round, however, we have full-time jobs and a whole lot more to share with each other than a bus pass; Namely, our own experiences.

“Your classmates will teach you the most,” MBA graduates tell me.

And actually, Ansari’s origins in a family business resemble my own career, though our industries (and perhaps intentions) differ. His family’s commodities business was straightforward and held goals of manufacturing cheaply and quickly that proved monotonous relative to the potential marketability of craft beer. So after more than a decade of working with the 40-year-old abrasives business, he completely turned it on its head.

Ansari’s isn’t the first family business to have evolved throughout its succession to survive — whether due to changes in the market or the family’s vision. Central to my own decision to pursue a graduate business degree is the story of the McNeely and Murphy families shared by their current businesses’ leaders, Paddy and Richard respectively, during a Family Business Center event in 2010 held in the same auditorium in Schulze Hall. Both businesses still survive a century later, but look very different to how they once did. The families were able to remain entrepreneurial and diversify their businesses.

Likewise, Ansari chose not to simply build a bigger brewery to do more of what he was already doing. Inspired by a visit to an Austrian brewery and entertainment complex in 2010, he wondered what could happen for his own business if he could just sell a glass of his product within his building, then illegal by state law. It wasn’t easy, but the resulting “Surly bill” repealed Prohibition-era laws and opened the doors for numerous breweries and taprooms in Minnesota. Ansari this as an encouraging growth of the craft beer culture in Minnesota rather than a threat to his own business. Now unhampered, Ansari hopes to open Surly’s destination brewery complex in Minneapolis next fall.

The idea of amassing this network of knowledge exchange to create our own Next Big Thing feels exciting. But without a doubt, standing on the shoulders of giants can be intimidating.

Forget hesitations about time, money and existing responsibilities — it’s not going to get any easier, Ansari said, advising an aspiring entrepreneur and meanwhile, allaying my fears. “If you’ve got a passion, you’ve just gotta go do it,” he said.

Julie Warner, marketing manager at Warners’ Stellian, serves on the Family Business Center’s Board of Advisers and is beginning the Evening UST MBA Program this fall.

What do a business school and a rock concert have in common?