How the Mall of America $ees Green by Being Green – Opus Magnum
Environment, Local business, Newsroom

How the Mall of America $ees Green by Being Green 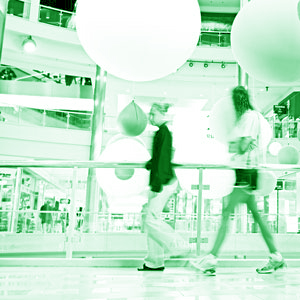 In April, Earth Day was recognized around the country. Having the Mall of America, one of the world’s largest and well-known shopping centers, in our backyard provides an interesting glance at how such a complex operation can find profit in what once was a cost center: recycling.

An EPA case study (pdf) notes that Mall of America “is considered a model of commercial recycling.” The current system in place has evolved from the early days of the mall, more than 20 years ago. The facility was designed for recycling before construction even began. Separate trash chutes for cardboard and other waste allow for a basic sorting by tenants, who have provisions in their leases requiring recycling.

With more than 40 million visitors annually, it is easy to imagine how quickly trash piles up at the mall. Interestingly, if you visit today, you won’t see recycling bins next to trash bins. Why? Because mall staff found that trash would inevitably end up with the recycling – instead, all of the trash is manually sorted in a recycling center before leaving the mall. In all, MOA recycles more than 60 percent of its waste – an average of 32,000 tons per year.

The EPA case study said the mall’s “waste management and recycling staff—totaling roughly 20 full time employees—collect recyclables from the chute system, carts, and waste storage rooms and transport the materials to one centralized loading dock for sorting and storage.”

On a behind the scenes tour of that recycling center, it was amazing to see the operation and how rather than letting waste products go to waste, the mall turns them into valuable resources for other use. There are special collection areas for cardboard, old light bulbs, glass, food waste, fryer oil, old paint, electronics, cans, and other metals. Each of these commodities is sold to recyclers—even the food. According to their website, “MOA recycles more than 2,400 tons of food waste to a local hog farm, which feeds more than one million hog meals annually.” In a month, the mall produces more than 4,000 pounds biodiesel from fat from restaurant fryers. Some of that is used to drive maintenance vehicles at MOA.

You can read more highlights of Mall of America’s green initiatives on the MOA website.

Besides the mall being green, the University of St. Thomas is improving its environmental credentials, too. This year UST received five awards or other forms of recognition for its use of wind-generated energy, the energy-saving design of its new student center, and its recycling efforts.

earth daynewsletter
May 3, 2013 by Clark Gregor

The power of one – what Droid could have become