After months of clandestine negotiations, the university announced today it will open Schulz Hall across the street from Schulze Hall in 2014. The new meeting and event facility will be named in honor of famous Minnesota cartoonist Charles M. Schulz, creator of Peanuts, the long-running comic featuring Charlie Brown. 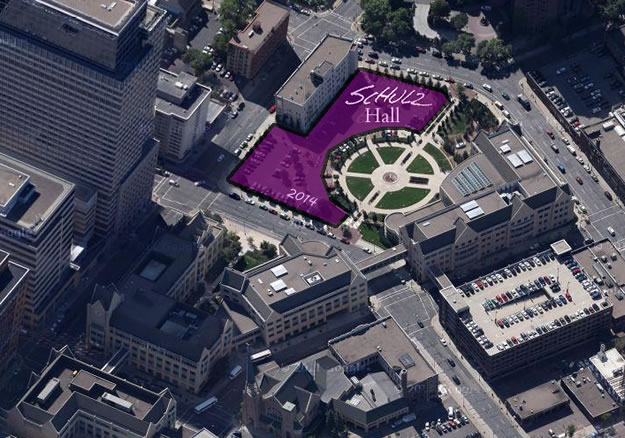 Architects are working on plans for the building’s design, to match the shape of Snoopy’s iconic doghouse, but built with UST’s traditional Kasota limestone. The new building will be built over the surface parking lot next to the historic MacPhail building.

The space will be used to host events and will include the fully-equipped Schroeder Ballroom, complete with miniature baby grand. An underground athletic field will provide coaching services to youth football players. Student advising and counseling services, will be provided at a charge of 5₵ in the Lucy van Pelt Center.

Echoing theEntrepreneur statue outside of Schulze Hall, a bronze statue of Charlie Brown will be placed outside the new building.

Richard M. Schulze, founder and immediate past chairman of Best Buy is the namesake of the building across the street, Schulze Hall.

Staff on UST’s Minneapolis campus have been enlisted on a task force to solve the inevitable confusion that will arise with the two similarly named buildings.

Networking Outside the Norm

What is meaningful work? – 5 Questions with Prof. Michaelson