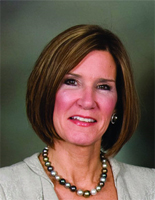 Noted political commentators Mary Matalin and James Carville spoke to an overflow crowd at the Opus College of Business on Wednesday, November 28, as the latest in the college’s distinguished speaker series. Their announced topic was civility, and they broached the subject both directly and through a sort of “leadership by example” as they civilly laid out their drastically opposed views of the American political landscape in the aftermath of the 2012 presidential election.

While both are accomplished speakers and operatives in their own rights, Matalin and Carville make an interesting duo as speakers because of their unique shared circumstance: Matalin’s a conservative Republican, Carville’s an outspokenly liberal Democrat, and the two of them have been happily married since the early 1990s. Clearly, they know a thing or two about civility in disagreements. 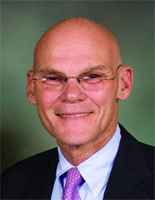 After an introduction by Christopher Puto, dean of the college, Matalin and Carville took turns discussing their views of the election and its consequences. Matalin went first, noting that the auditorium was full of “potential future one-percenters.” As one would expect, she was emphatic in her belief that President Obama didn’t come away from the election with any sort of mandate; to this end, she cited Republican success in some downballot races and some post-election polls. Along these lines, she also stated that she still sees the United States as “a center-right country.”

Matalin’s remarks got a bit more surprising when she took a step back and looked at the bigger picture. She noted that much political commentary on television is empty, pro forma “Kabuki dance.” After mentioning that the 2012 election was the 20th one she’d been involved with, Matalin listed the 3 great lessons she’s learned in politics;

2. You learn more from losing.

3. Show me a good loser and I’ll show you a loser.

She also, in mentioning that she’d been wrong about fiscal issues being paramount in people’s electoral decision-making, put a bit of distance between herself and some of the trademark conservative Republican social issues (most notably gay marriage).

And then it was Carville’s turn. After noting that the Opus College of Business was “probably the best MBA value in the country” because of the “great community support here,” Carville spent much of his time looking forward to 2016 (or, as he put it, “talking about  the next meal while eating the current one”).  Carville predicts tremendous pressure from within the Democratic party apparatus for Hillary Clinton to run, so that the party will have ample time to coalesce around a candidate. On the other side of the aisle, he predicts an extended primary fight on the Republican side.

Carville said that the situation he predicts is unusual, that “usually Democrats fall in love while Republicans fall in line.” But next time around, he says, the Republicans will be in the unusual-for-them situation of having no immediately obvious next candidate the day after the election (he notes that Mitt Romney and John McCain were both considered frontrunners for their party about 4 years before the elections they ran in).

Moreover, Carville suggested that a bruising primary battle in 2016 would actually be a good thing for the Republican party, a chance to have an open debate in the face of what he called a brand crisis in the face of changing demographics that get, on average, 2% worse for the current Republican coalition with each election. “The brand has to adapt,” he said. “And it will adapt… These things have a cycle.”

Carville also noted that the current movie about Abraham Lincoln is one of the best portrayals he’s ever seen of how hard it is to get things done in Washington, and that there’s a lot of truth to Otto von Bismarck’s famous line about the law and sausage.

After their separate remarks, Matalin and Carville took questions from the audience.  When asked about third parties, both were dismissive. Matalin stated that our system was designed around the idea of two parties, and that multiparty parliamentary systems are much messier than ours is. Carville pointed out that it’s no picnic to start a new party, and the one you end up with in the real world is quite likely to be nothing like the one you’d dream up if you were designing from scratch.

Asked about success in the modern socioeconomic climate, Carville pointed out that a higher top marginal tax rate in the 1990s didn’t seem to cramp anybody’s style; Matalin countered by asking why it was always higher tax rates with him, and never spending reforms.

Carville’s best line of the night came in response to one of the audience questions, when he stated, “the hardest thing in democracy is convincing the 51% not to kill the 49%.” This got a laugh, but he was quick to remind the crowd that over 600,000 Americans died during the Civil War. And here the theme of the evening’s speech gets a practical boost: civility is good not just because it makes life more pleasant (although it certainly does) and because it can make the marriage of two people with radically different beliefs work (although the evening was a living demonstration of that principle). It can, at the margins, keep society from falling apart.

Along those lines, it was fitting that Carville closed the evening with what he said were the three most important words in marriage: “surrender, capitulation and retreat.”

The Little Idea That Could: The untold story about the development of Target Field