Views of Election 2012 from Senator Durenberger: The Value of Democracy

The following commentary is from Senator David Durenberger, Senior Health Policy Fellow of the National Institute for Health Policy at the University of St. Thomas. Senator David Durenberger served as Minnesota’s senior U.S. Senator from his election in 1978 to replace Muriel and Hubert Humphrey until his retirement in 1995. Durenberger earned a reputation as a thoughtful national leader on health policy reform while in the Senate and continues in that role as a member of the faculty at the Opus College of Business. 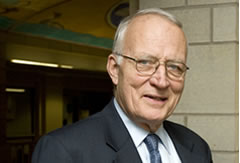 Nothing was as devastating to representative government in the last four years as U.S. Senate Republican leader Mitch McConnell (R-KY)’s pledge that his party would make President Obama a one-term president.  Americans knew they were in trouble by the time Obama took office.  At times of crisis we come together as a nation.  In retrospect, it is clear that every elected Republican everywhere in the country, at every level of government took the “McConnell pledge.”  The 2010 elections appeared to demonstrate the effectiveness of the tactic.  But the elected and the Republican presidential primary showed Americans that dividing America rhetorically served to divide us as family and as community.  That’s just not who we are.

The best applause line in 2012 campaign speeches was “reaching across the aisle.”  Sen. Amy Klobuchar (D-MN) did it and won 2/3 of our vote.  Cong. Michele Bachmann (R-MN6) did the opposite and very nearly lost her seat to an unknown Democrat and entrepreneur.  More importantly, Americans instinctively know the problems they face are the problems we all face. We face uncertainty about our present and our future. The need for confidence building from those in a position to do so was demonstrated by Gov. Chris Christie(R-NJ) reaching out to President Obama in Hurricane Sandy.

In state after state, the polls showed that the power of a good ground game was superior to billionaires buying negative advertising.  It was superior to an ideologue with $100 million of her own money buying a seat in the U.S. Senate.  It was superior to “outside money” trying to buy Senators in states they rarely visit and really don’t care about.

There is real value in a two-party system in a country like ours, if it reflects the diversity that makes America great.  The genius of a country without a common gene pool provides opportunities for men and women with proven records of service, and acquired liberal and conservative philosophies, to reflect a progressive role for government in every state in the North and South, urban and rural, old and young, rich and poor.

A Constitution is critical to representative democracy.  The highest compliment you can pay an elected representative is to mean it when you say “I don’t always agree with you, but I vote for you because I always know where you stand.”  Republicans were elected the majority in the MN legislature in 2010 and sought to use our Constitution to bring the party’s “base” to the polls,  to discourage some voters from voting, and to substitute the Constitution for the work we do every other year with our votes.  We rejected it – and them.

In many elections across this country, voters made it clear that freedom of religion is a cherished right of being an American.  However, it is not a substitute for good judgment and a representative democracy when it comes to the role of government in this country.  To be truly free, office-holders must be free to express both their beliefs and the shared beliefs of citizens in the most diverse nation on earth.  Hopefully, some Christian church leadership and all Christians will re-consider being the “base” of the Republican Party on all issues solely to change the constitutional definitions of life and family.

You don’t have to be wrong for me to be right.  This is the title of Rabbi Brad Hirschfield’s book  and that statement provides President Obama and the newly-elected Congress an approach to their mutual responsibilities for the next four years.  In his acceptance speech the President paid tribute to Governor George and Lenore Romney and the legacy which is their son Gov. Mitt Romney.  Obama promised to give voice to Mitt Romney’s commitment to service. That’s a great start and may well be the second Governor Romney’s contribution to politics in America.