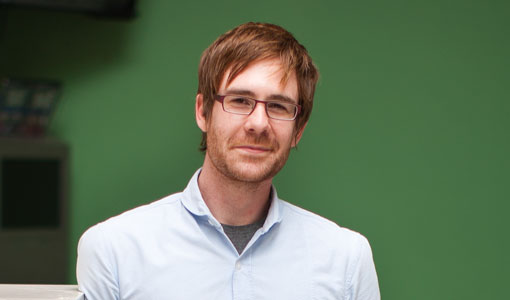 Chris Cook '09 M.B.A. embraces the benefits of working for a small business.

When Chris Cook joined FRWD as a senior analyst in August 2009, it was a new company, and he was its fifth employee. The company, which assists clients such as St. Jude Medical and 3M with digital media strategy and execution, now has 30 employees. In a company that small, “each role is bigger than it appears on paper,” Cook said. His own role is to work as a client point-of-contact, requiring him to understand his client’s business, goals and challenges and to translate this to the media team within FRWD. As a liaison with the client, he serves in a consultative role, helping shape the client’s marketing strategy.

For Cook, FRWD’s size was part of its attractiveness. As he considered the career path he wanted to take after earning his M.B.A., he questioned whether or not to follow the traditional MBA career path in a corporate environment. In the end, he decided he was attracted to something “smaller, nimbler, more innovative.” He continued, “I know I have an impact, and if I’m not here, I’m missed.” He recommends that future MBA students evaluate job opportunities based on their gut feelings: “Am I taking this opportunity because I think it befits an MBA, or because it is right for me? Will this give me the opportunity to flex muscles that a more traditional path might not afford?”

FRWD isn’t the only choice Cook has made in which (small) size has made a difference. Cook largely chose the Full-time UST MBA program because of its “commitment to ethics and implications of business decisions on the customer, the industry, the environment and society. I didn’t feel I could get that elsewhere.” But he also weighed the small class size and the high number of international students. “That opened up opportunities for me to get different perspectives,” he said. In one instance, however, he was looking for something larger: Cook came from Omaha and wanted to study in a larger metropolitan area with a range of industries. “Minneapolis has a great base of agencies and creative talent.”

Not surprisingly, Cook’s background prior to his M.B.A. was not the typical business path. As an undergraduate, he studied studio art, and health care administration and policy. After college, he wanted a job that would allow him to apply business principles while creatively approaching challenges. “I look at things in a less linear way,” he said. He joined a start-up company that was creating software to manage hospital staffing through online tools and systems. He was so fascinated by his experiences on the job that he decided to pursue an M.B.A. While at St. Thomas, he added to his experience, using new and emerging technology to reach consumers through a Target.com internship, creating a social media strategy through an internship with Catalyst Studios, assisting with a marketing strategy, both online and offline, for the Multicultural Forum, and supporting the online operations for Kate Herzog’s House of Talents (see the Spring 2010 issue of B. for more information on Herzog’s business).

Herzog’s vision and determination inspire Cook. So do children. “I always appreciate being around children. They see the world with untarnished curiosity,” he said. “I want to give kids digital cameras for a day and watch what they do. It’s a very literal way of getting a child’s eye.”

Cook doesn’t regret his chosen career path. “I want to continue to forge and explore new territory. I think this is where the future of marketing is going to happen. We need to approach things in a way that’s measurable. If you can’t draw a line between money spent and results, you don’t do it.” Despite, or perhaps because of, his immersion in digital marketing during the workday, he avoids screens in his off hours, choosing instead to pursue things such as photography, hiking and camping. “There’s a place for digital tools without being attached to a screen.”

About FRWD
Cook notes that while people may initially think of FRWD as a traditional agency, the business uses more of a consultancy model: “We don’t just stop at ‘Here’s the creative, and here’s where you should put it.’ We say, ‘Here’s what we know. We’ll help with execution.’ Our projects aren’t just one-offs. We believe in long-term engagements. We act as agents, do research, look at trends in an industry. We don’t want to just participate in events; we’re leading.” One way they seek to lead is through their event series, Pushing Boundaries. A recent event focused on online privacy concerns.

The Business Case for Teamwork Skills