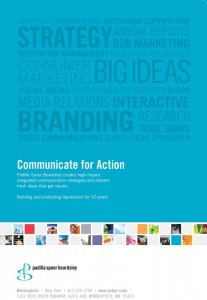 The Star Tribune article featured interviews with several of the firm’s first employees in the 1960s, and it’s clear there was a bit of a “Mad Men” vibe during that decade.  While the multi-million dollar firm is now led by a woman, there were only three female employees in 1969–an office manager, a receptionist, and a “gopher.”  Public relations consisted mainly of press releases and publicity stunts to draw attention to businesses.

So the next time you’re watching an episode of “Mad Men” and wonder what might have become of Don Draper and his colleagues in the 21st century, look no further than the riverfront headquarters of Minneapolis’ top public relations firm.

When to break the silence in a business crisis