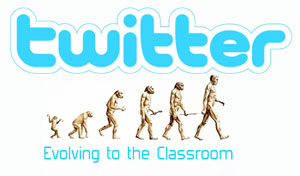 I have a Twitter account, but at times—like many others—I don’t use it or really gain that much value from the steady flow of tweeted headlines, “5 tips for blah blah blah” and banal updates on what’s for lunch.

I was recently at a conference of marketers where the use of Twitter and other social media to interact and build upon the face-to-face interactions was essentially the base expectation for attendees. At times updates to the conference hashtag were coming in by the dozens every time I refreshed the Twitter app on my phone. It was great to read and contribute to the community’s conversation.

Now it seems that others are finding new ways to capitalize on platforms like this to enhance education and facilitate discussion. The New York Times reports:

Erin Olson, an English teacher in Sioux Rapids, Iowa, is among a small but growing cadre of educators trying to exploit Twitter-like technology to enhance classroom discussion.

I think this is an intriguing idea. If you miss class, just follow the #BLAW643 hashtag (so far, there are no tweets mentionig that). I know that there are risks to encouraging the use of “distracting” devices like smart phones in classrooms: ensuring that students are on-task on their phones is a challenge; cyber bullying and “off-topic, inappropriate or even bullying remarks” are a possibility. But by monitoring the conversation and engaging in it teachers or professors can encourage students to participate in class—in a way they may be more comfortable doing. It is the “if you can’t beat ’em” strategy…

… With Twitter and other microblogging platforms, teachers from elementary schools to universities are setting up what is known as a “backchannel” in their classes. The real-time digital streams allow students to comment, pose questions (answered either by one another or the teacher) and shed inhibitions about voicing opinions. Perhaps most importantly, if they are texting on-task, they are less likely to be texting about something else.

Others are looking into the possibilities of ideas like this as well, Taking Teaching Further is a website that is evaluating emerging technologies and their teaching implications in higher education. Jason Archer, the Educational Media Designer at Spring Arbor University,* shared an interesting presentation there on Twitter in Higher Education.

Students in the UST MBA took a small step in this direction this spring with a live tweet-stream projected during our “MBA follies.” Though in this case the commentary wasn’t particularly educational, it certainly added to the fun and entertainment of the evening.

Instead of being a distraction — an electronic version of note-passing — the chatter echoed and fed into the main discourse, said Mrs. Olson, who monitored the stream and tried to absorb it into the lesson. She and others say social media, once kept outside the school door, can entice students who rarely raise a hand to express themselves via a medium they find as natural as breathing.

Beyond campus I’ve seen prime-time television shows put the hashtag for their program on screen through the whole episode so viewers can add their comments and read others as they watch. (A smart idea to entice viewers to watch when shows are broadcast rather than time-shifting with a DVR.)

Back at my conference, I was experiencing the impact of social media. During one keynote, the audience was not really connecting with the speaker. Tweets went a little overboard with real-time online commentary. The event organizers were following too and cut the speech short. It led us later to a discussion on “Twitter crisis management,” but that’s another blog post.

The next day, before news of the death of Osama bin Laden broke—but after programming was interrupted for some unknown breaking news—I turned again to Twitter to follow speculation, and later reaction, over the news. Twitter was beginning to prove its value (to me at least).

Are you an active user of Twitter or other social media platforms? How are you using them? What to you think of integrating some kind of on-line discussion into classes?

*Interestingly, I saw a tweet about Spring Arbor University last week, unrelated to this blog post, that they had to postpone their commencement “due to sickness consistent with the Norovirus or Noro-like virus.”

educationsocial mediatwitter
May 18, 2011 by Clark Gregor

No Pain, No Gain – No Matter What

Three strategies that can give Nokia and Microsoft a chance

Easter Greetings from the Opus College of Business