The Business of Baseball

In anticipation of the Minnesota Twins’ first three-game home series of the season this weekend, we’re creating a three-post series of our own looking at the business of baseball.   Today we’ll examine the importance of effective team management.  Tomorrow, we’ll consider the mouth-watering new food options expected to generate additional revenue at Target Field this season.  We’ll conclude the series on Friday with a look back at the long and complex process leading up to the construction of Target Field. 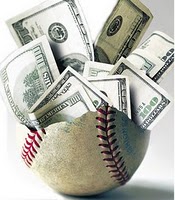 It isn’t often that Harvard Business Review covers the topic of baseball, but it recently posted a podcast on its website featuring an interview with Jonah Keri, author of The Extra 2%: How Wall Street Strategies Took a Major League Baseball Team from Worst to First.  In his book, Keri investigates how a series of smart, strategic management decisions took the Tampa Bay Rays from one of the least-successful franchises to one of the most competitive in just a few short years. Keri, also a Wall Street analyst, uses financial concepts such as arbitrage to explain how Tampa Bay’s management was able to incrementally improve its competitive position and unseat teams with much deeper pockets (the Yankees and the Red Sox) from atop the American League East standings.

Closer to home, the Twins have been one of the most successful teams of the past decade, winning 6 American League Central division titles.  This is despite the fact that during most of those years, the Twins had one of the smaller team payrolls in Major League Baseball.  Unlike many teams which build their teams by paying large salaries to buy top players from other clubs, the Twins (much like the Rays) have mainly relied on “home-grown” talent developed in their farm system.  MVP Justin Morneau, 3-time batting champion Joe Mauer, and pitching phenom Francisco Liriano are just a few examples of players who have spent their entire careers with the Twins.

In his interview, Keri cites effective marketing and efficient operations as key drivers of business success for professional baseball teams.  Dave St. Peter, President of the Minnesota Twins, discussed the same ideas in his presentation to our MBA students last spring.   Patrick Klinger, Vice President of Marketing for the Twins, also elaborated on the Twins’ highly successful advertising efforts at a Master’s Pub last fall.

Don’t forget, the Twins aren’t the only baseball game in town.  The St. Paul Saints are an independent professional baseball team that has drawn over 4 million fans to Midway Stadium since 1993.  The Saints, of course, have been in the news lately because of their push for a $20 million bonding bill for a new stadium in downtown St. Paul.  The Twins have a shiny new stadium–why not the Saints as well?

Baseball fans may want to read Stefan Fatsis‘ Wild and Outside:  How a Renegade Minor League Revived the Spirit of Baseball in America’s Heartland. Written in 1995, Fatsis looked at the Saints and other small-market independent baseball teams that formed the Northern League in 1993.  The league focused on the fan experience and the “true spirit” of baseball–in stark contrast to Major League Baseball, where disagreements over revenue sharing and bloated payrolls led to an 8-month player strike in 1994-95.  While MLB has not had a strike since then and the independent leagues have struggled to survive, the book is still a fascinating inside look at the business side of baseball.

Want to know more about the business of baseball?  The Society for American Baseball Research has formed the Business of Baseball committee, which has the mission “to study all aspects of baseball administration and off-the-field activity including economic, organizational, labor and legal issues.”  On its website, you can read research articles and review documents pertaining to all aspects of the business of baseball.  You may never look at baseball the same way again!

“Hey” is for horses

Disclosure of Incentives in Word of Mouth Marketing – 5 Questions for Prof. Abendroth