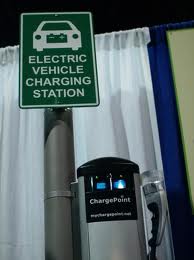 UST MBA alumna Jean Sweeney, Vice President of Environmental, Health and Safety Operations at 3M, recently spoke with the Pioneer Press about the addition of an electric car charging station at 3M’s Maplewood headquarters.  For a company that has built its success on innovation for more than 100 years, it seems only fitting that it would be among the first of Minnesota companies to install charging stations for its employees and visitors.

Best Buy, founded by UST benefactor Richard Schulze, has recently announced that it will sell home recharging stations for electric cars, complete with Geek Squad installation.  When you’re on the road, the Charge Point Network provides locations where you can recharge your electric car battery.

Interested in purchasing an electric car?  An article in last week’s Star Tribune lets you know where you can test-drive one and place an order for delivery later this year.  You can also check out the “Green Room” at next month’s Twin Cities Auto Show, featuring electric and hybrid cars.  The auto show will be held at the Minneapolis Convention Center, just a stone’s throw from the UST Opus College of Business Minneapolis campus.

How do you land a major client for the first time?