Jargon Genesis: Throw in the Towel

“If we don’t get any traction with our sales in Asia this year, we’ll have to throw in the towel.” 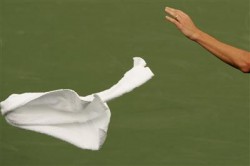 Ever wondered about that phrase? You who are fans of boxing might be well versed in its etymology. Back in the day, whatever day that was, boxers would return to their corner after having their face bludgeoned by their opponents. There the manager, whose face was not bludgeoned, would give sage advice and wipe their fighter’s face clean with a sponge. I am inclined to derail this etymological explanation with a diatribe against a “sport” that is so barbaric, it regularly leaves its participants brain damaged, but I will restrain myself.

When the fighter had had enough, either he was nearly unconscious or was too exhausted to stand, the manager would throw in the sponge, as a signal that the fighter was surrendering. In the 1860 Dictionary of Slang, the phrase was recorded as “throwing in the sponge.”

Since then, boxing has evolved so far as to use a towel instead of a sponge. I’m guessing this is more sanitary, but that is purely conjecture. As the face-wiping apparatus evolved, so did the phrase.

If you’re feeling contrary, next time you’re ready to give up on a project at work, suggest to your team that you “throw in the sponge!”

Shanna supports marketing and admissions initiatives for the Evening UST MBA Program, as well as serving as an excellent first point of contact for prospective students. She received her M.B.A. from Brigham Young University and her B.A. in music performance from Indiana University. She started her career in brand management at General Mills before joining the St. Thomas Evening UST MBA team. In addition to her passion for the UST MBA Programs, Shanna is an avid athlete with particular affection for the active culture of the Twin Cities.

Want to expand your marketing network? Join us for the Alphabet Bash!

Tales from Abroad: Negotiations are Hard