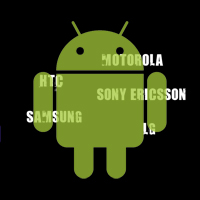 What started happening 2-3 years ago in the mobile phone industry absolutely redefined the entire game. iPhone and Android were the ones who changed it. The two questions here are: do mobile phone makers see the big picture of what happened and where this is all going and are they doing something to save their once very strong and powerful brands?

Back in time when first mobile phones came to market, it was all about hardware and design. Nobody really cared about the software piece because it was very basic. All that people used cell phones for was making calls and sending text messages (and sometimes bragging). Things that mattered at that time were reception quality, battery life, pre-loaded collection of ringtones, black and white or color screen, etc. Then mobile Internet came and software became a little more significant because of web browsing quality, email, etc. but people still cared more about features like Bluetooth, bigger screen, camera, EDGE versus GPRS, mp3 player and so on. Even when Windows Mobile OS hit the market 10 years ago, it was still hardware that mattered the most. The mobile phone makers had all the branding power and were on top of the game.

Today the situation is nowhere close to what it has been 4-5 years ago. Mobile software platforms changed everything and now hardware is becoming a commodity (except for iPhone which is the only exception and an absolute winner). Now that hardware finally accumulated all necessary features like Wi-Fi, HD video recording, 3G/4G support, etc. and not progressing as fast as before, the role of the manufacturers got diminished and so did their once powerful brands. Now the operating system matters the most and the reality is that this operating system has its own brand – Android. And it now stands out in front of all the traditional mobile hardware makers (I am not mentioning Windows Phone 7 here because the concept is absolutely the same plus it is nowhere close to Android in terms of authority and popularity).

What phone makers have to understand right now – and also admit no matter how hard it will be – is that their once strong and shining brands were eclipsed by Android. Today, features that are important to consumers are almost all software related (apps, music, video, web browsing, email, etc) and hardware makers now have to figure something out to keep their brands relevant. Roughly speaking, these days, anyone who has enough money can launch a mobile phone that runs Android and become more popular than some of the oldest manufacturers (assuming smart marketing in place, of course) because the hardware brand is not that important anymore. A good example is HTC, a Taiwanese phone maker. Before it started making Android based phones, nobody even knew this name in the United States (it was popular in Europe and Asia with their Windows Mobile OS smartphones). Look at them now. The point here is that in order to save their themselves from fading behind software, phone manufacturers have to make their brands stand out again and the only way to do this is through marketing and R&D strategies.

The way they market themselves today is not good enough. People still ask their friends: “Should I get an iPhone or Android?” They’re not asking: “Should I get an iPhone or Motorola?” This means that phone manufacturer brands do not have a clear competitive advantage. The rules have changed so fast that they could hardly understand what was going on. The first ones to embrace the new reality and Android were Motorola and HTC and they were rather successful because of that (these two actually got too excited and absolutely messed up the branding with models like Droid, Droid X, Droid Global, etc. (Motorola) and Droid Eris, Droid Incredible, etc. (HTC) which still blows my mind – how can two different manufacturers have the same brand printed on their phones, I’ll never know). Then Samsung jumped on board and now we have these Big Three that are dominating the Android platform. Other guys like LG, Sony Ericsson and whoever else is trying to stay relevant were quite late and it will be much harder for them to catch up but they still have a chance to be more successful than they are right now.

One strategy for restoring the brand power could be to reduce the number of models and focus on very few (ideally one or two). One of the reasons iPhone became so successful is because there’s only one iPhone. There’s no iPhone Incredible (although it is rather incredible) or iPhone Global or iPhone Pro or whatever else these Droids got out there. The times when a phone maker had hundreds of different phone models in its product line-up is over. The focus has shifted from hardware to software and the more hardware models you produce, the more confusing it is for customers and more eroding it is for your brand. Constant upgrading of one or two models can build a much stronger brand and authority. It will also help save money that is spent on developing and producing all these numerous models. Using model version numbers or features (just like iPhone: 3, 3G, 3GS, etc.) is a great way to let customers know that it’s a newer version of an existing model that they already know about (and the one that a good amount of marketing dollars has been spent on). It will be much easier for them to mentally connect to Samsung Galaxy II versus, say, Samsung Orbit. Also, the version numbers/features strategy brings another advantage as customers can clearly see that the model they already know has been upgraded (technologically more advanced). Now, for example, they know that there’s something much better and newer in the new Galaxy II versus if they would be trying to guess if there’s anything better in the Samsung Orbit.

One more thing that hardware makers should do to is to differentiate their hardware by focusing on and strongly marketing a certain feature or two. This one will be easier for manufacturers that have some other technologies that they are famous for like Sony and their Cybershot camera (or the PSP integration which they are doing right now) or Samsung with their various LED screens. Makers like HTC, Motorola and LG do not really have anything to brag about but they can try to create some competitive advantage through R&D and marketing strategies. LG could, for example, invest in better audio hardware and claim that their phones have the best sound. HTC could invest in batteries and say that Android lasts the longest on HTC. These are just two things off the top of my head as I’m writing this article but the bottom line is that a well developed and implemented marketing strategy can help restore some of the brand power that hardware makers lost in the last few years.

And one more little thing as I’m wrapping up. The other two big mobile phone companies that own both hardware and software, Nokia and RIM, will eventually have to adopt either Android, Windows Phone 7 or both in order to stay in business. The sooner the better actually. There’s absolutely no chance they can stay relevant if they persist to their own operating systems. The world has learned in the last decade at the example of Windows and Mac OS that more than two global platforms for operating systems will not work (Windows Phone 7 can have some kind of a shot here due to the fact that they own a wide range of Windows based products used worldwide which can be used on their mobile platform). So once Nokia and RIM make this transition (and again, the sooner the better), they will have to follow the strategies described above in order to somehow differentiate themselves from other phone maker brands and maintain their positions in this extremely competitive space.

Vitaly Demin is a professional strategy consultant with years of international experience. He worked in Russia, Middle East, India, Europe and the US consulting large corporations on strategic management, marketing and web technology. Vitaly holds a Master’s degree in Linguistics and Communications and is currently getting his MBA at the University of St. Thomas.

A busy week for a student

Moving in to the new House of Talents