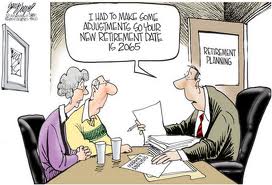 The financial turmoil of the past three years has greatly impacted many Americans’ financial plans for retirement.  However, Twin Cities residents may be faring better than most, according to a recent survey by Ameriprise Financial, which happens to be headquartered in Minneapolis.

The survey found that five out of six Twin Cities residents have set some money aside for retirement, far above the national average of 69%.  They are also more likely to feel confident about their retirement plans and have higher incomes and more assets than the average American.  A significant majority also indicated that they plan to remain in Minnesota upon retirement rather than move to a warmer climate.  One wonders if the results might have been slightly different if the survey were conducted on a wintry day like today rather than in September.

While individuals appear to be putting more money into savings since the end of the recession, the overall U.S. savings rate (which takes into account corporate and government savings) remains at its lowest level since the Great Depression, as reported earlier this year by Bloomberg.  There have also been numerous stories recently about problems with corporate and government (particularly state and local) pension plans, as many underfunded plans are greatly reducing the benefits that had previously been promised to workers.  It may seem like this is a concern that has come to light only recently, but this 2005 article from Business Week shows that warning signs were clear even during the last economic boom.

The bottom line for individuals?  It’s more important than ever to supplement pensions and social security payments with personal savings.  According to Ameriprise, Twin Cities residents are more prepared than most, and this bodes well for the local economy.  With many Baby Boomers expected to retire during the next 15 years, it will be interesting to see how financially prepared individuals truly are for retirement, and what impact this will have on the local and national economy.