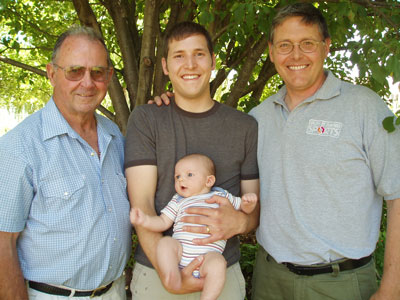 What seemed like a normal, Midwestern upbringing to Matthew Bruch, in hindsight, was an exceptionally fortunate childhood, born of multiple generations of hard work and increasing educational attainment. Matt is in his second year of the Evening UST MBA Program and was identified early on as an excellent student and a person of great drive and character. When asked about his early life, he described it thus.

“Born in Milwaukee and raised in Oshkosh Wisconsin, I grew up in a typical middle-class Midwestern family.  At the time, I thought nothing peculiar of the way I was raised, but I now see that my parents were extraordinary people.  They fostered in me an enthusiasm for knowledge and learning.  Whenever my father repaired something he made sure I helped him.  I assisted my mother in the garden and in the kitchen.  Both of them would tell me about their work and show me what they do.”

Around 1950, Myles Bruch, Matt’s paternal grandfather, built a thriving excavation company, Bruch Brothers Excavation, although his education consisted of formal training only through the sixth grade. This was a pivotal generation in the Bruch family line. It was through this professional accomplishment that Grandpa Bruch was able to provide opportunities for his family and encourage them to go to school.

Matt’s dad, Ron Bruch, was a beneficiary of this success and was the first in the family to go to college. He attended University of Wisconsin – Stevens Point for his bachelor’s degree in zoology. When Matt was a child, he observed his father taking night classes, balancing work and family, to obtain a masters degree in biology from University of Wisconsin-Milwaukee. Later, remarkably, Mr. Bruch returned yet again to the college scene. This time he was well into his fifties, and he pursued a PhD in biological sciences from UW – Milwaukee.

Matt describes the impact of his father’s decisions. “His perseverance and determination were incredibly inspiring to me.  Going back to school was a major commitment for a man so far along in his career with a busy life and heavy workload.”

Nonetheless, Mr. Bruch completed his PhD and has reaped the rewards of his labors. The PhD led to career advancement, speaking engagements around the world, a featured spot in an IMAX documentary, and a recent book publication, People of the Sturgeon.

Following in his father’s footsteps, Matt began his education at the University of Wisconsin-Madison, majoring in finance with a certificate in international business and German. One of Matt’s early transformative experiences was his study abroad in Freiburg, Germany, where, he astutely observed, most of his learning took place outside the classroom. He recalled one night in Antwerp, when, after extensive searching, he was unable to secure an empty bed in a hostel. This left him no option but to sleep overnight on a bench in the train station! He learned to book rooms in advance for the remainder of his travels.

Post-graduation, Matt began his career at United Airlines world headquarters in Chicago. There he held a role in revenue management, a fast-paced position that required extensive market savvy and the ability to make pricing decisions in a time-sensitive environment. Matt leveraged his German cultural and linguistic experiences to quickly build rapport with his partners at Lufthansa.

In 2006, Matt and his wife Michelle moved to the Twin Cities, and he took a position first with Target Corporation and then Hennepin County Medical Center. When it came time for Matt to decide if he should pursue his MBA, he remembered his father’s advice that he should always “do his best.” Thus, with a wife and a new baby and a demanding position with HCMC, Matt began his MBA at the University of St. Thomas.

This decision has proven valuable for many reasons. Matt has seen an immediate difference in his professional accomplishments; he learns new concepts in class and is able to apply them to his daily work functions, benefitting his company, his coworkers, and his career. Another tremendous benefit of his decision to pursue a UST MBA has been the exceptional networking opportunities. Last year, Matt networked through his peers into a position in the Finance Leadership Development Program at General Mills. This has been a wonderful change for Matt and his family, removing him from an industry challenged by government budget cuts and tremendous organizational changes.

Matt is on an exceedingly fast track to complete his Evening UST MBA. The average time to complete is currently three to four years, but Matt aims to graduate in December 2011, approximately two and a half years after starting the program. Matt looks forward to a long career with General Mills, moving up in the company armed with his UST MBA. Ultimately, Matt aims to carry on his family legacy of professional success and educational attainment, passing along to his son the lessons and character he has received through the generations.

Don’t Be a Lazy Job-Seeker

Effective Feedback: How to Criticize Your Friends – and Still Keep Them