Jargon Genesis: Jump on the Bandwagon

It seems fitting that politicians would adopt a technique and its related jargon that was initially used by circus performers. I’ve often felt like I was at a circus when watching a political debate. But I digress from my phrase of the week, “jump on the bandwagon!” 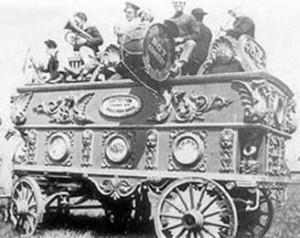 Renowned showman Phineas T. Barnum wrote an autobiography, astutely titled, The Life of P.T. Barnum, Written by Himself, 1855. Wasn’t it nice of him to include the date in the title? That way I don’t have to reference it.

In this work, Mr. Barnum wrote, “At Vicksburg we sold all our land conveyances excepting four horses and the ‘band wagon’.”

This band wagon was highly decorated and paraded through town to attract the attention of the locals and draw them to the circus. About the time Mr. Barnum was writing his book, politicians started using band wagons when campaigning for office.

By 1899, the literal use had turned figurative, as recorded by President Theodore Roosevelt in Letters. “When I once became sure of one majority they tumbled over each other to get aboard the band wagon.”

Next time you feel particularly politically inspired, and you’re inclined to jump on the band wagon, just be grateful modern technology has allowed you to do so figuratively, without having to tour the town with a prattling politician.

Shanna supports marketing and admissions initiatives for the Evening UST MBA Program, as well as serving as an excellent first point of contact for prospective students. She received her M.B.A. from Brigham Young University and her B.A. in music performance from Indiana University. She started her career in brand management at General Mills before joining the St. Thomas Evening UST MBA team. In addition to her passion for the UST MBA Programs, Shanna is an avid athlete with particular affection for the active culture of the Twin Cities.