As a manager, “Do You Have Their Backs?” – Opus Magnum
Entrepreneurship, leadership, Newsroom

As a manager, “Do You Have Their Backs?” 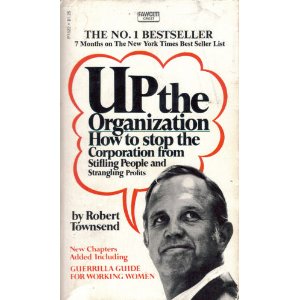 HBR’s Conversation has a great post this week about management and covering people’s backs. It helps, as an employee, to know that your boss supports you. “There are many nuances to how bosses protect their followers, but it’s a useful simplification to say that the protection must be both tangible and emotional.”

Robert Townsend might be the poster child for the kind of boss that provides tangible cover to his team. He tends to be known at this point for having written the most outrageous management book ever published, Up the Organization. It’s a collection of 150 or so ruminations on business life that are delightful, irreverent, and sometimes politically incorrect — all penned in an era before blogs were invented and such things were called short essays. But Townsend gleaned his insights from his succession of management jobs, notably as CEO of Avis Rent-a-car, where he was a widely loved wildman. In contrast to the usual hollow rhetoric, he never left any doubt that the people of his organizations came first, and that his job as a boss was to serve as defender and warrior on their behalf. Once, for example, he fought off a request from a powerful Avis board member, National Broadcasting Company founder David Sarnoff (aka “The General”), that would have been a time sink for his staff. Sarnoff couldn’t believe there was no accurate tally of all the cars that Avis owned, and demanded that one be produced — a task that would have taken weeks. In that kind of situation, any of us can imagine rolling our eyes, but in a choose-your-battles world, how many of us would have refused? Townsend did, because he knew his people had more important work to do. “If I don’t need it to run the company,” he told Sarnoff, “you sure as hell don’t need that information as an outside director.”

Check out The Conversation to read more.

Three strategies that can give Nokia and Microsoft a chance