Is BP’s spill a leak or a gusher? 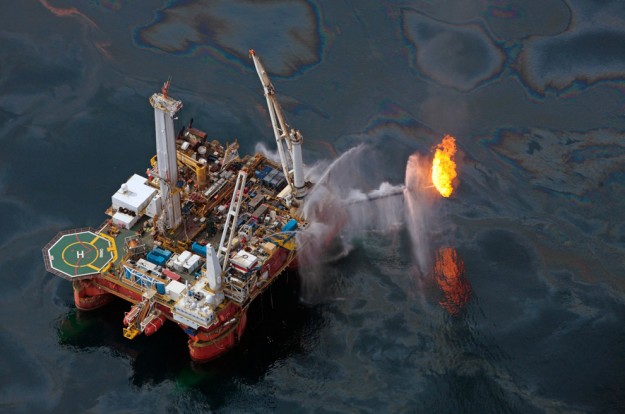 The Q4000 drilling rig operates in the Gulf of Mexico at the site of the Deepwater Horizon disaster Wednesday, June 16, 2010. (AP Photo/Dave Martin)

Since April the media have been actively covering the aftermath of an accident on a drill rig operated by BP in the Gulf of Mexico. Generally reporters use the term “leak” to describe the flow of crude oil into the once pristine waters of the gulf. It occurred to me that this minimizes the situation – like accidentally lopping off the garden hose with the mower and calling the free flow of water a leak. In wondering how this characterization occurred, I looked to the earliest press releases from BP. In the first quote on the matter, the company refers to the situation as a “spill.”

In the firm’s press release on April 22nd, 2010, Group Chief Executive Tony Hayward was quoted – “We are determined to do everything in our power to contain this oil spill and resolve the situation as rapidly, safely and effectively as possible.”

Now – if the same amount of oil was bursting from a well in central Texas, it might be termed a “gusher,” and rightfully so.

Both spill and leak understate the situation as we now know it, yet as of this writing, the most recent BP releases still refer to the situation as a “spill.” Now, questions about statements in the first days of this crisis would be imprudent. In their defense, BP officials could not have known in those early stages how the situation would evolve. That’s not unusual in a crisis, but to continue to characterize the flood of crude into the water at this stage as a “spill” seems… well… disingenuous, if not unethical.

As a PR practitioner, I would be among the first to suggest in the face of a crisis to take action on engaging the media and other stakeholders – effectively setting the stage to best present the case of the organization facing a public dilemma. In that role, I would choose words carefully to mitigate the potential for inflammatory responses from reporters or the public during the initial stages of the crisis when the perimeters of the situation are still unknown.

In the BP case, two months later, there is significant material evidence that an incredible amount of oil has been released. Yet neither BP nor the majority of mainstream media seems to have adjusted core language to reflect the gravity of the incident. In fact, the media seem to more consistently use the work “leak” – the softer of the two terms.

How/why the media continue to characterize this as a “spill” even as the reporting calls attention to the devastation caused will remain a puzzle. Don’t expect anyone from BP to begin correcting reporters on the matter.

Dr. Michael C. Porter, APR is the director of the UST MBC program.

Corporate Responsibility: A View from an NGO, Business and Academia

The Medical Device Tax: Brakes on an Economic Engine

Six Practical Principles for Business from the Catholic Social Tradition