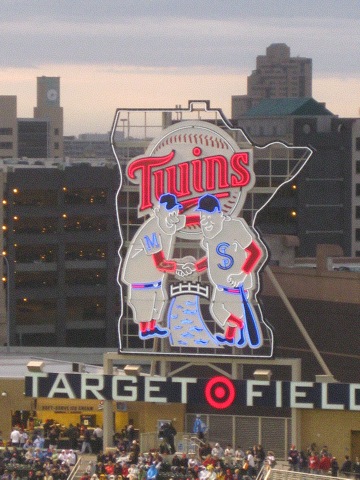 More than 100 MBA students, staff, and faculty welcomed Dave St. Peter, President of the Minnesota Twins, to the UST campus yesterday.  Asserting that the Twins “have been drafting players on character for 40 years,” Mr. St. Peter discussed the importance of making business decisions that align with the team’s brand image.  He listed three key features of the Twins brand:  winning tradition, focus on family, and support for the community.

The Twins won the World Series in 1987 and 1991, and they have won the AL Central Division title five of the past eight years—so winning is definitely a tradition for the team.  St. Peter cited Twins greats such as Harmon Killebrew and Tony Oliva as examples of world-class players who were also outstanding citizens, enhancing the Twins’ image.  Joking that the team “just signed a 184 million dollar contract for a backup catcher” since Joe Mauer has sat out the last few games with an injury, St. Peter talked about how the current team’s scandal-free star players like Mauer, Justin Morneau and Michael Cuddyer support the Twins’ focus on building solid relationships with the community.

Closely aligned with support for the community is the focus on providing safe, affordable family entertainment.  St. Peter noted that the Twins take pride in the fact that a large percentage of fans at every game are children.  The team management has made a conscious decision to keep ticket prices low by major league standards so that families can afford to attend Twins games.  Also, St. Peter discussed how creating a consistent, family-friendly environment at games is important in ensuring positive experiences for fans and encouraging them to attend games regularly.

St. Peter explained how his personal values align with the Twins’ corporate culture.  He said that patience, persistence, and hard work have been the keys to success in his 20-year career with the Twins.  Having worked as an intern, manager of a Twins retail store and entry-level front office staffer, St. Peter saw value in his early experiences with the Twins organization.  He told MBA students in the audience:

You are not entitled to anything.  Nothing is guaranteed—you have to earn it.

This advice was particularly timely for the students as the academic year comes to a close and students seek summer internships or full-time positions.

Touching on the successful opening of Target Field last month, St. Peter described it as “a collaboration” with the community and called it “the most urban ballpark” built in the U.S. in recent years.  Pointing out that 20 percent of fans arrive by public transit, far above the national average, he highlighted the fact that Target Field is also the “greenest” major league stadium, achieving silver LEED certification.  Approximately 500 fans per game arrive by bicycle, many of them on the Cedar Lake Trail, which terminates at the stadium.

Finally, responding to a question from a member of the audience, St. Peter said that from a business standpoint, the Twins have two main challenges going forward.   The first of these is customer retention:  due to the opening of Target Field this year, the Twins have more season ticket holders than ever before.  St. Peter says his staff is focused on maintaining and building this customer base.  The second closely related factor is service excellence.  Fans will only return game after game if they enjoy the experience, so St. Peter and his staff constantly evaluate all parts of Target Field operations, from concession stands to lighting to pedestrian traffic flow.

Based on the enthusiastic student response and numerous questions for Mr. St. Peter, there is little doubt that UST MBA students have purchased a sizable number of the 3 million tickets sold for the first Twins season at Target Field.  We appreciate his time and share his hope for the Twins to return to the World Series—and a warm, dry October!

Intersections: Where theory and practice converge

For Part-Time MBAs, a Full-Size ROI