How to avoid death by PowerPoint

Students across the country are wrapping up final projects this month, and UST is no different. Today, in fact first-year UST MBA students begin their presentations in Applied Business Research, presenting the findings of a semester’s worth of work consulting for a local business. They will be using their presentation skills, gained in the Applied Communications Lab.

Presentation skills are essential in any realm of professional life. We use PowerPoint in our admissions information sessions. There are innumerable sales pitches every day. Every conference session seems to have a few dozen slides. In the U.S. Department of Defense “PowerPoint has crept into the daily lives of military commanders and reached the level of near obsession” says the New York Times.

General McChrystal, the leader of American and NATO forces in Afghanistan, was shown a PowerPoint slide in Kabul last summer that was meant to portray the complexity of American military strategy, but looked more like a bowl of spaghetti. 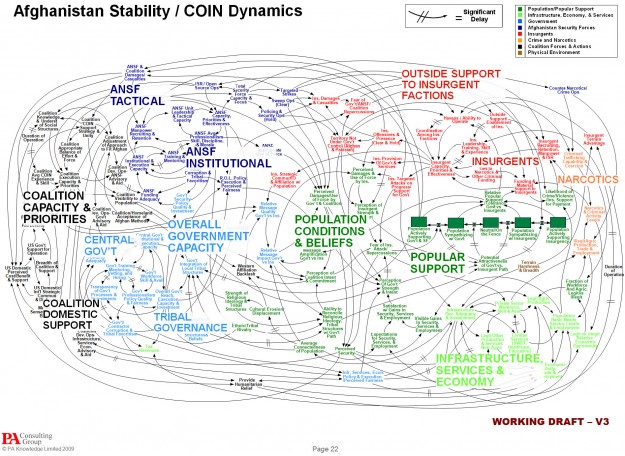 McChrystal gets two PowerPoint briefings in Kabul per day, plus three more during the week. General Mattis, despite his dim view of the program, said a third of his briefings are by PowerPoint.

Brig. Gen. H. R. McMaster, who banned PowerPoint presentations when he led the successful effort to secure the northern Iraqi city of Tal Afar in 2005, followed up at the same conference by likening PowerPoint to an internal threat. “It’s dangerous because it can create the illusion of understanding and the illusion of control,” General McMaster said in a telephone interview afterward. “Some problems in the world are not bullet-izable.”

Similarly, Edward Tufte, an expert in information design, has criticized the way Microsoft PowerPoint is typically used. In his essay “The Cognitive Style of PowerPoint,” Tufte criticizes many properties and uses of the software, extending to its use by NASA engineers in the events leading to the Columbia disaster.

I still feel that PowerPoint is useful and can help presenters to strengthen their message.  Dan Heath and Chip Heath, authors of Made to Stick, have a lot of advice on creating “sticky” presentations. Perhaps as a supplement, or for some last-second advice for students, here are their three tips on how to “avoid that bullet-riddled PowerPoint presentation that everybody loves to hate.”

There are plenty of additional resources out there. Check out Presentation Zen, where they take on this same topic, every day. There’s even video of the Heath brothers’ tips. And good luck in those presentations—I hope nobody falls asleep!

Thoughts on Orientation: The Juice Will Be Worth the Squeeze

From Bio to Business and Theory to Practice