Is there an “invisible hand” of social media? – Opus Magnum
Media, Newsroom

Is there an “invisible hand” of social media? 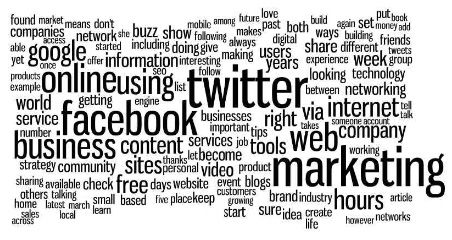 The word cloud you see above shows us how far we still have to go in understanding social media and how to use it.

This is an interesting phenomenon. One thing I noticed specifically is how small the word “blogs” is. I wonder if blogs are decreasing in popularity already, or if they aren’t seen as “social” media or if they are already “old/traditional” media in the world of marketing on Facebook and Twitter (I had to get those in there so we could make it in to the word cloud). The blog continues:

It’s as if people in the early days of the automobile were talking only about engines and tires, rather than about the impact of mobility, the rise of sprawl and the death of passenger railroads and small towns.

But, of course, nobody had foreseen those things in the early days of the automobile. In similar fashion, I don’t think we should beat ourselves up for not having yet figured out the long-term impact of social media.

I’ve been to several conference sessions with marketing and higher ed experts discussing the importance of social media in marketing, but I always come away feeling that all the power-users of these tools are just the marketing people. How many “average” users are there on Twitter, following others? Slate discussed this last year:

After examining some 300,000 Twitter accounts, a Harvard Business School professor reported…that 10 percent of the service’s users account for more than 90 percent of tweets. The study dovetails with recent analysis by the media research firm Nielsen asserting that 60 percent of Twitter users do not return from one month to the next.

I don’t deny that businesses should be in this realm. More and more people are getting comfortable with social media every day. In fact, I would suggest that there are a good number of “stealth followers” of blogs, facebook pages and twitter feeds. I don’t want to “become a fan” or “like” every product out there, but I will occasionally check them out. And that could be part of the answer here: the power users spread the message and chat about it, while the invisible stealth userd–who do not want to engage int eh conversation–take it in.

What do you think? And will you engage in this conversation?

Reading Outside of the Classroom