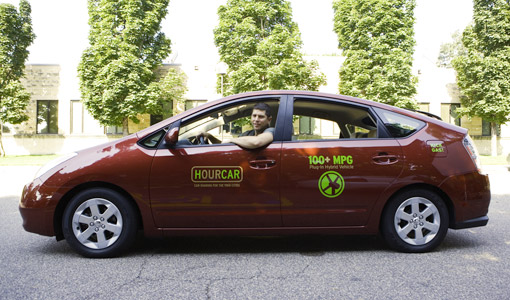 When I moved to New York City, as soon as I could, I sold my car. There, cars are more of a burden than a benefit, with high gas and insurance prices, everyday challenges finding parking and worrying about security among other things. Plus it was so easy—and usually faster—to get around the city by subway or bus.

Fast forward a few years as I was moving to the Twin Cities; my goal was to get by without a car. People told me it would be impossible. I thought the same thing—but so far, I’ve succeeded. (My wife does drive our one car.) Thanks to buses, access to the skyway and HOURCAR, I’m getting around town easily and avoiding a lot of hassle and expense that comes with having a second car. Now HOURCAR is placing two new Toyota Priuses on the University of St. Thomas’ Saint Paul campus.

Joe Zimsen ’06 M.B.A. worked as the program manager for HOURCAR a few years ago. He detailed the benefits, environmental and otherwise, of the program in the Fall 2007 edition of B. Magazine.

The environmental impacts are remarkable as well. HOURCAR has several hundred members who, since joining, have reduced their driving by about 18 percent per month. The combination of reducing driving and using fuel-efficient HOURCAR vehicles means that members burn 32 percent less fuel, eliminating almost a ton of carbon dioxide emissions per member each year. And this is just what can be measured among the members. Fewer cars in the daily traffic stream contribute to better traffic flow and less rush-hour congestion. Every car on the road then consumes less fuel, further reducing greenhouse gas emissions. End result: cleaner air and lower traffic volume. Simple, personal decisions like this can make a big difference to anyone’s budget, and improves the quality of life for us all.

Since then, the program has grown. According to a recent article in the Star Tribune:

The nonprofit, run by the St. Paul-based Neighborhood Energy Connection, is closing in on its 1,000th member. That may pale compared with car-sharing hot spots such as San Francisco and Chicago, but it’s impressive considering how much we Minnesotans love our cars.

“A lot of our early members had the environment as their top-of-mind issue,” [Christopher Bineham, Hourcar’s program manager] said. “In the last couple of years, people are happy to support the environmental issue, but it really is a lifestyle issue. They love the multi-modal option of 10 minutes of reading on the bus, and biking and walking,” grabbing a car only when they really need it. In fact, he noted that the average American car sits unused 23 hours a day.

I’m hoping that even if I move out of downtown, I can continue to get by without a car. As the article notes of the current HOURCAR membership, “a few hail from first-ring suburbs and combine HOURCAR with busing and biking.” But if that doesn’t end up working, I discovered today another interesting option: person-to-person car-sharing.

RelayRides bills itself as the first person-to-person car-sharing marketplace. Launching soon in the Baltimore area, the site allows people with cars to earn money by renting them out to people who don’t have cars of their own. Car owners begin by registering with RelayRides, which then arranges for a certified mechanic to install a device in the car that will allow authorized renters to access it without having to be given keys. It also establishes an insurance policy to cover renters during the rental period. Next, owners set the car’s rental price, along with where the car will be rented and when it is usually available. Renters can then reserve the vehicle by the hour or day within the owner-set schedule. RelayRides screens the driving record of every renter; it also promises to take care of owners in the event of any loss. A renter rating system, meanwhile, lets owners provide their own evaluations. With suggested hourly rates of between USD 6 and USD 12—covering 20 miles per reserved hour or 160 miles per day along with gas and insurance—owners can earn as much as $8,000 per year by renting out their cars for just 20 hours a week, RelayRides says.

Maybe one of our own entrepreneurial students will work with RelayRides or HOURCAR to get some similar program going here in the Twin Cities. I’d join!

Everything Old is New Again