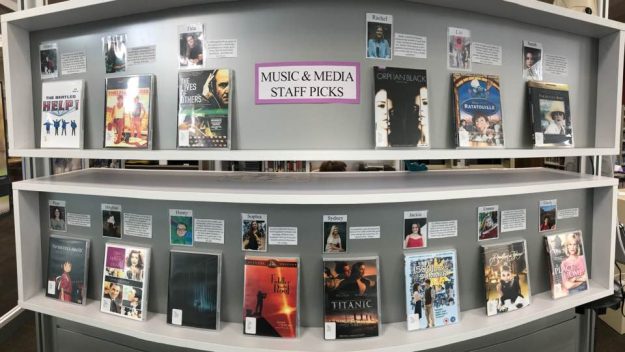 The Music and Media Collections of O’Shaughnessy-Frey Library is now closed physically but we still offer services needed while you study and work online!

Please contact us at any time and we will respond as soon as possible. Email us at: libmedia@stthomas.edu or by phone at 651-962-5447 (the phone message will be forward to our email, so please speak loud and clear). For more detailed questions, please contact the Head of the Music & Media Collections, Cindy Badilla-Melendez

How can I return DVDs and CDs?: You will not be able to return items physically to the collections until the library opens at a later unknown date. Do not put DVDs in drop box, they will break and would be your responsibility. Please contact Cindy Badilla-Melendez if you are leaving the city and not returning to campus.

Will I incur late fees when the library is closed?: Not at this time. We have extended the due dates of all the items that are currently checked out to patrons, while the Library is closed.

Can I put films on course reserves? We can no longer put physical titles on course reserve. However, faculty can still request streaming titles for class viewing. Contact Cindy, Head of the Department cbadillame@stthomas.edu

How can I replace this DVD/CD for streaming? Contact the Head of the Department immediately for possible options.

Faculty members, students, and staff can still access thousands of streaming titles for research, projects, and classes. We are happy to help you find what you are looking for!

Thank you for your patience!

LibKey Nomad: Get to the Full-Text Faster!

Have you ever found an article citation in Google Scholar or *gasp* Wikipedia, and wondered if the library had full-text access? Or perhaps a publisher has sent you links to some articles hot off the press and you just really wish you didn’t have to search for them via the library site to see if we have access? Great news–the St. Thomas Libraries have begun using a new tool called LibKey Nomad. And now that many of us find ourselves working from home, LibKey Nomad will make connecting to full-text access provided by the Libraries even easier!

LibKey Nomad is a browser add-on for Chrome that facilitates access to articles available from St. Thomas Libraries’ subscriptions without needing to go to the library website.  It’s like a shortcut to our GET IT service. And because it is a browser tool, you will know if an article is available before you have to log in to your University of St. Thomas library account. LibKey Nomad is currently only available for Chrome.

In response to the significant impact COVID-19 is having on the educational community, JoVE is providing FREE access to their STEM education video library collection through June 15. While this access does not include all of JoVE’s content, it does include access to the following:

In order to obtain access, you must use your St. Thomas email address to create an individual JoVE account. Go to https://www.jove.com/ and click the “Log In” link at the top of the page and then hit the “Sign Up” button that is provided. From there you can save the login/password info to your browser or simply re-enter when returning to the JoVE site.

From DVD to Using streaming videos in your online course

At the Music & Media Collections we will do everything we can to continue supporting the teaching and learning during this difficult time. Faculty if you have DVDs that you were planing to show in class or wanted your students to watch we may be able find streaming options for those titles or alternatives. Please contact Cindy Badilla-Melendez, Head of the Music & Media Collections.

Here is a link to free online video resources: https://libguides.stthomas.edu/filmographies/FreeOnline

Also, as a reminder we have access to more than 16 streaming video databases see below.

During the month of March, the University of St. Thomas Libraries is conducting a trial for the Berlin Philharmonic Digital Concert Hall.  This is a platform that offers concerts for each season. Around 40 concerts are broadcasted live and they can also be viewed at a later date in the concert archive. The archive already contains hundreds of recordings with all the great artists of classical music. There are also fascinating documentaries and bonus films. Access numerous interviews, and Educational Programs.

Australia on Video at UST 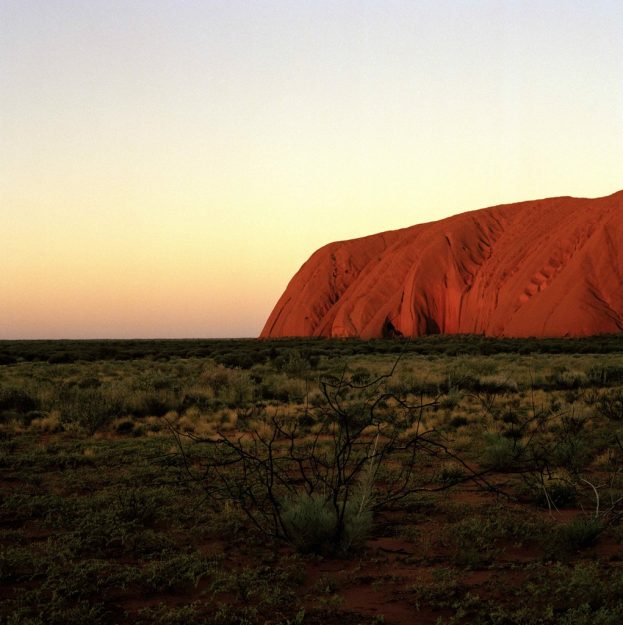 News of the devastating fires in Australia has been in our feeds for many weeks and while we can feel powerless to help, it is important to appreciate and learn about this fascinating country. Listed below are some thrilling titles from the Music and Media Collections.

Off the coast of Queensland is the Great Barrier Reef, the largest living structure on Earth stretching over 1,200 miles long. This feature length BBC program reveals its creation, its inner workings, and its complex relationship with its inhabitants and our changing world. QE 566 .G7 G7 2013 DVD

Discovery Channel’s Australia Revealed uses high-definition panoramic photography to capture the majesty of the continent. Told through stories of inhabitants, this extensive documentary shows the multitude of experiences people have with the untamed landscape. Russell Crowe narrates. DU 117 .A97 2007 DVD

For an epic yet close-up look of the Land Down Under, watch Australia’s First 4-Billion Years from Nova. Geologist Richard Smith leads the viewer on a journey of discovery, showing what prehistoric kangaroos, and crustaceans looked like and how asteroids shaped the land. Four hours of viewing! QE 340 .A97 2013 DVD

Oranges and Sunshine tells the story of real-life English social worker Margaret Humphreys who uncovered a scheme that forcibly relocated poor children from the UK to Australia and other Commonwealth countries, exposing them to hard labor and abuse. She reunited estranged families and brought worldwide attention to her cause. Emily Watson, Hugo Weaving, and David Wenham star in this powerful 2012 drama.  PN 1997 .O728 2012 DVD

Rabbit Proof Fence (2002) brings to life author Doris Pilkington’s book, telling her mother’s story when she was one of thousands of mixed-race Aboriginal children taken from their families and sent to camps in a deplorable effort to erase native peoples from Australia. Ranging in ages from 8 to 14, Pilkington’s mother Molly, her sister, and cousin made a nearly 1,000 mile-journey home on foot. Kenneth Branagh portrays A. O. Neville, the driving force behind the eradication of Aboriginal peoples in the 1930s. Music by Peter Gabriel. PR  9619.3 .P535 R3 2003 DVD

In The Dressmaker (2015), a woman accused of murder as a child (Kate Winslet) returns to her hometown seeking closure, ultimately exacting revenge on the townspeople. Judy Davis, Liam Hemsworth, and Hugo Weaving costar in this remarkable adaptation of Rosalie Ham’s 2000 novel. PN 1997 .D753 2016 DVD

See WWI from a different perspective in 1915, a 6-hour mini-series from the Australian Broadcasting Corporation. The drama follows two best friends as they face the horrors of war. PR9619.3.M2514 N5 2006 DVD

The Shiralee (1987) is a heartwarming tale of Mac, an itinerant rural worker who, due to marital strife, hits the road with his daughter Buster in tow. Life-or-death circumstances force Mac to make the most difficult decision he can imagine. This two-part drama brings D’Arcy Niland’s 1955 novel to life. PR 9619.3 .N534 S5 2008 vol. 1 and 2 DVD

Check out these quintessentially Australian dramas! In A Place to Call Home, nurse Sarah Adams returns home after spending two decades in Europe, forming a connection to the wealthy yet troubled Bligh family. Watch the complete series full of secrets, romance, and intrigue! PN 1997 .P538 2014 sea. 1 disc 1-2 DVD  Also, in the collections are all five seasons of The Dr. Blake Mysteries. Haunted by WWII, Dr. Lucian Blake, together with housekeeper Jean Beazley and his enthusiastic colleagues, solves Ballarat’s most tangled crimes. PN 1997 .D633 2015 sea. 1 disc 1-2 DVD

Stop by the Music and Media Collections to pick up any of these titles and more! We’re located in on the first floor of the O’Shaughnessy-Frey Library to the right of the Main Circulation desk.

Lumière (originally known as the Library of Foreign Language Film Clips) was created by the Berkeley Language Center in 2008. This online library contains 20,389 clips drawn from 5,697 films in 62 languages.

UST Faculty can use clips that have already been created or create their own. Also, entire films are available. The clips/films can be requested only from films St. Thomas and Berkeley both currently own.

To access Lumiere, click in the following link: https://lumiere.berkeley.edu/login select “Apply for an Account.” Under “User institution” be sure to select University of St. Thomas (MN) and include your department and role. For more information, contact Cindy Badilla-Meléndez, Head of the Music & Media Collections.

For detailed instructions on how to use Lumière do to this link: https://libguides.stthomas.edu/Clips/Lumiere

Note:
This Collection is limited to faculty only. The Collection cannot be used for campus screening (not for public events).
In order to approve your account, you must agree to post the URLs only in Canvas, where access is limited to students enrolled in your class; do NOT send links via email to your students.

Starting February 9th, the vendor Alexander Street will be pulling their records out of CLICsearch to replace them with updated ones. As a result, videos from Alexander Street’s databases will not appear using the “Videos” filter in CLICsearch. Same goes for music/audio. This process will take several weeks but when it is done all searches will return to normal.

Here is a list of databases that will be affected:

During this period, to find videos please use both “Audio Visual” and “Videos” filters TOGETHER so you can have results from Alexander Street databases and all the other databases.

To find music/audio please use both “Audio Visual” and “Audio” filters TOGETHER.

If you have any questions or concerns, please contact the Head of the Music & Media Collections, Cindy Badilla-Melendez at cbadillame@stthomas.edu or at 25464. 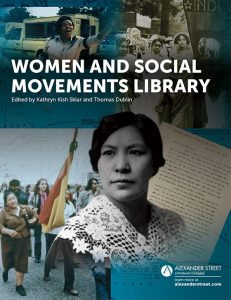 The Libraries are now running a trial of the Women and Social Movements Library .   This database focuses on women’s public activism globally, from 1600 to the present. Created through a collaboration with leading historians, the collection contains nearly 400,000 pages of primary source documents and more than 200 related scholarly essays interpreting these sources.  The materials are organized around three major topic areas:

This resource is available to preview through Friday, February 28, 2020. Please send any comments you have on this resource to Ann Kenne (amkenne1@stthomas.edu). 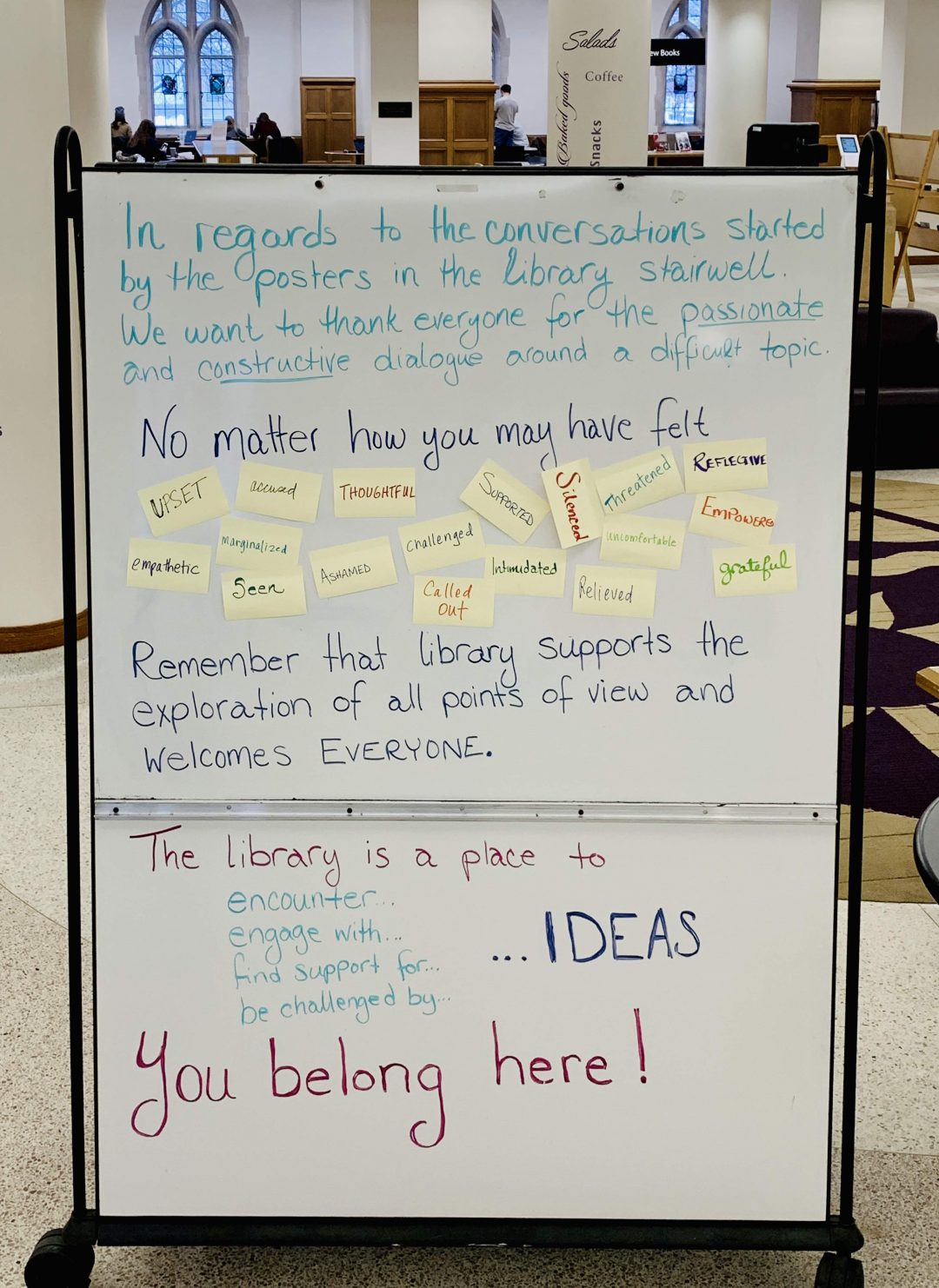 In regards to the conversation started by the posters in the library stairwell. We want to thank everyone for the passionate and constructive dialogue around a difficult topic.

No matter how you may have felt

Remember that the library supports the exploration of all points of view and welcomes everyone.

The library is a place to 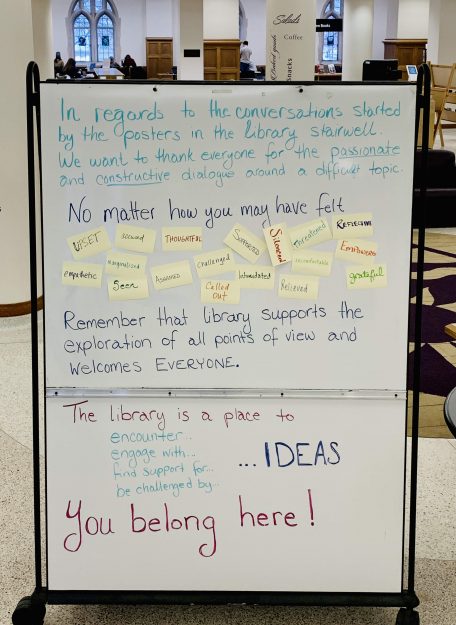 You can read more in the TommieMedia article about the World Café posters.