James Silas Rogers usually goes by Jim. But when writing and teaching, he likes to use his “funky, Yankee” middle name to “stand back a bit” from the world of Irish studies. Rogers is what you might call deep into this world— he’s an Irish-studies scholar, the editor of New Hibernia Review, and the director of the Irish Studies program here at St. Thomas. His newest book, Irish-American Autobiography: The Divided Hearts of Athletes, Priests, Pilgrims, and More just came out, and it’s a unique and thorough look into what it means to write about Irish American identity. 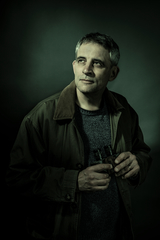 James (Jim) Rogers, English professor and director of the Center for Irish Studies, poses with binoculars for a studio portrait April 13, 2016 for St. Thomas magazine.

His mother, on the other hand, had the classic Irish-American upbringing: “She knew green,” he explained, laughing. “She knew popular culture, she knew Bing Crosby songs, she knew the St. Patrick’s Day parade.” But beyond his mother and a few classmates at his grade school—St. Augustine’s in South St. Paul—the only other Irish influence Rogers knew as a child was his priest, Father Tom Nolan (who ensured the student could look forward to having St. Patrick’s day off each year, he explained, laughing again).

Rogers is a quick, humorous thinker who doesn’t pause to linger on his jokes but instead keeps a hearty momentum. And while he’s certainly knowledgeable enough to speak from a place of pretension, he doesn’t He’s instead a generous, open book, or perhaps even an open encyclopedia—when I ask him of his favorite contemporary Irish writers a little later on, he hits me with names, titles, and the specific geographic locations of where each writer is from. But after warmly filling in the details of his own past, Rogers grew more pensive to talk about his book.

“I want to be careful not to get too mystical or over the top about this, but the last chapter of the book talks about the phenomenon of people going to Ireland and feeling home where they’ve never been. And that’s something that really interests me.” He describes this notion of home-going as a trope for many Irish-Americans visiting Ireland for the first time—John F. Kennedy made a particularly famous roots trip in the summer of 1963 and raved about how familiar it felt.

Rogers explains this phenomenon, saying, “I think in many ways it’s a constructed experience. Ireland comes to us, in the American imaginary, as a place that’s invested with an aura of specialness.” He continues, “part of the allure of Ireland to Americans is that idea that it exists as a country we think we used to be, or exists as the country we wish we were. That it’s somehow a little less hurried, it’s a little less materialistic, it’s a little more genial. That can be quite untrue in contemporary Ireland, a lot of that, but I think that in our imagination in America Ireland takes that role.”

The imagination is key to Rogers’ examination; he chose to focus his book on the early 20th century, the point at which, “you couldn’t quantify it with things like membership and county association, things like immigration numbers. It moved into the much more slippery realm of the imagination.” So for Rogers, what holds the book together is the attempt to make sense of what “Irishness” means, especially for those people whose primary connection to Ireland is through either family or “the American Imaginary.”

He explains that because of this, many Irish Americans feel there should be something distinctive about their identity, “but they don’t necessarily know what it is, nor are they necessarily happy when they find out.” After chuckling, he explained that a big part of this identity is “that sense of duality, of having a foot in both worlds, of having a foot in both Ireland and America…that personal dividedness that seems to permeate Irish life.” This notion, he explains, is the root of his book’s subtitle.

In discussing all this, Rogers speaks with authority and ease, which is impressive given all the nuance of Irish-American identity and Ireland’s diasporic, globalized history. He explained, “I get very uneasy about people who claim to have an ‘authentic’ or deep genetic connection to Ireland. I think it’s worth interrogating what those connections were. I’m kind of a sucker for popular culture, there’s a lot of popular culture in this book.” That pop culture, despite being what he’s termed “cornball,” or “schmaltzy,” (“ you know, When Irish Eyes are Smiling stuff!”) helped keep Irish American identity alive, especially before transatlantic travel was accessible. 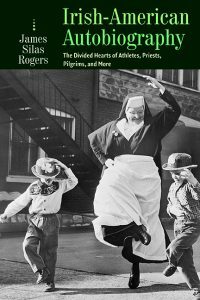 Popular culture plays a unique role in Rogers’ own interest in all things Irish. His route to academia was somewhat nontraditional, and he noted repeatedly, “I’m pretty much the luckiest man in the world.” He was working as a LPN in a hospital when he gradually began taking an interest in Irish music and dance. When he fell in love with his Irish dance teacher, they began going to every Irish concert in town. Rogers’ first trip to Ireland was with his teacher, whom he eventually married. He then began taking a more academic interest, and eventually went back to school for Irish Studies. He now directs the Center for Irish Studies, where he is primarily responsible for editing the New Hibernia Review and organizing the annual O’Shaughnessy prize for poetry. “I’m really lucky to have had this job, I’ve grown into it.”

But the autobiography project was in the works long before he ever became a director, editor, or prize-giver. “I actually announced in 1976, before I had graduated college, before I had really read anything, ‘I think I could do a book about Irish American Autobiography,’” he explained. He still has the green index cards to prove it—he found them a few years ago while moving house. But when it came down to actually creating the book, he clarified, “in a way I didn’t write this book, I assembled it from pieces that were there.” He pulled from articles that go back 16 years and conference papers that go back 23. But the wait, it seems, was worth it; the book is a triumph of cultural studies. To this, Rogers commented, “I’d like to think my book and my work is a little bit more humanist in its orientation. I do think there’s something about, for lack of a better word, a soul, that gets spoken to there.” As the book covers everything from pilgrimages to sports to TV and movies, I’d have to say he’s succeeded—it’s a delightful and rich collection. Rogers will be reading and signing book in the leather room at noon on Tuesday, February 28, which is sure to be a treat.