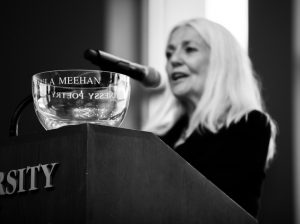 Poetry today is often delivered in snippets; ripe lines are plucked out of context while the occasional short poem floats around on the internet, standing brave and alone. Of any genre, it makes sense that poetry is the one often spliced and separated—each word is artfully selected for its power and precision. But this practice makes it easy to forget the fantastic old quip on synergy:  the whole is greater than the sum of its parts. Paula Meehan, the 2015 O’Shaughnessy prize winner from Dublin, understands the power of synergy to a well-structured book of poems. Her new collection, Geomantic, is a rare set of poems best kept intact; though beautiful alone, these poems stand together and interact to create a unified piece of fresh, innovative art.

Unlike the standard poetry collection unified simply by an idea or tone, Geomantic is deliciously mathematical. The book is unified by nines—each poem is nine lines long and there are 81 poems (nine groups of nine). Nine is a satisfyingly symmetrical number to use as a guide; the cover of the collection leans into this pleasant numerical balance, featuring a colorful 3×3 square of tree-scenes. There are three different tree-scenes depicted in the square, each repeated thrice in the matrix, creating a scene both natural and orderly. The organized variation of the cover continues on each page within, for variations in stanza lengths and tones are tidily tucked into nine reliable lines. The effect is mesmerizing and almost trance-inducing.

The guide of nine can potentially be traced to one of the book’s most memorable poems, “The Moon Rose Over an Open Field.” The poem’s title likely refers to a line from the Simon & Garfunkel song America. The poem reads:

Count the syllables, a perfect line:

the way moon rises with the vowels,

the knacky way it moves on the tongue

and beats out its intent on the ear.

When I heard it first my fate was sealed:

it offered a pathway out of fear,

order from chaos when I was young,

a pure lyric from inchoate growls,

muse magic wrought from the power of nine.

As the poem comments on the syllabic perfection of the line, it also champions the way it provided “order from chaos.” The poem itself takes on a mirrored rhyme—it first line matches its ninth, the second the eighth, the third the seventh and so on. This carefulness encapsulates Meehan’s masterful sense of control. The poem’s final line is both haunting and prophetic: “muse magic wrought from the power of nine,” could easily stand in as a thesis for text.

The magic, mystic quality of the text is conjured from the title: Geomantic. As the back of the book explains, the word is “belonging to geomancy,” or “earth divination.”  This is “a method of divination that interprets markings on the ground or the patterns formed by tossed handfuls of soil rocks, or sand.” Geomancy, then, is deeply tied to both the earth and the geometric notions of shape and pattern; this is a stripping back to the roots, as both make use of the Greek “geo-.” Meehan’s poetry manages to invoke geomancy to blend nature with human markers and measures; her poetry combines cycles of all kind. Pattern and cycle help unify poems on the moon, land, history, life, death, family, and even poetry itself. Sometimes, the poems feel deeply modern or contemporary—“The Memory Stick,” for example, is a poem about a lost flash drive. In the same collection is “The Graves at Arbor Hill,” which ends on a thought of “Irish dust in Irish wind, a hundred/and a hundred million years from now.” This blend of past, present, and future makes the text feel somehow simultaneously deeply connected to the earth and out of space and time entirely. Geomantic is captivating; as a near-meditation, it’s a collection best consumed all at once that immediately demands a reread. It’s easy to imagine picking it back up season after season, cycle after cycle, time and time again.

On Femininity and Taboo in Katie Donovan’s Watermelon Man