3 Things You Didn’t Know about the Albertus Magnus Chapel 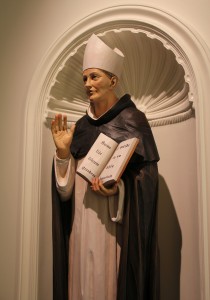 1.     St. Albert the Great was the real-life Nicolas Flamel.

You all know the story of Nicholas Flamel: he was an alchemist who invented the “Philosopher’s Stone” which produced an “elixir of life” that could turn metals into gold and bestowed immortality.  Why do you know this?  Because that’s the story J.K. Rowling told you in Harry Potter and the Sorcerer’s Stone, is why.  And that story is a more-or-less accurate retelling of various old seventeenth-century legends about medieval sorcery and alchemy.

Except those stories name Albertus Magnus the inventor of the Sorcerer’s Stone, not this Flamel interloper.  According to legend, Magnus either discovered or invented the holy grail of alchemy in the course of his chemistry experiments and long studies of Arab writers.  As he lay dying, St. Albert supposedly passed the Stone onto his pupil, Thomas Aquinas, but it has since been lost.

Albert sure makes a more logical central character in this legend than Flamel.

St. Albert is recognized even today as a genius, who wrote treatises on every topic.  He was not only an authority in the fields of theology, philosophy, Biblical exegetics, ethics, logic, and politics, but did extensive work in “natural philosophy,” or modern experimental science.  He advanced the fields of physics, botany, geography, astronomy, mineralogy, chemistry, zoology, and even phrenology.  He was perhaps the most widely-read man alive, absorbing many classic writers who had fallen into obscurity, all the great thinkers of the Church, and many Arab and Islamic writers.  He wrote a major refutation of Averroes, and was largely responsible for restoring the works and methods of Aristotle to prestige.  His commentaries on the Sentences of Peter Lombard put him firmly among the stars of the Scholastic age.  He taught and later defended Thomas Aquinas against charges of heresy, and participated in some of the greatest theological battles of the Middle Ages.  He is one of only thirty-three Doctors of the Church, bearing the title Doctor Universalis, or the “Universal Doctor,” for the vast breadth and depth of his knowledge.

Nicolas Flamel was a scrivener.

Nevertheless, I think we should all write to J.K. Rowling in protest.

This one’s actually true.  Albert lived before the formal condemnation of astrology by the Catholic Church, and actively defended the practice in his Speculum Astronomiae, written apparently while he was Bishop of Regensberg. (Albert’s authorship is still disputed in some quarters, with the 1912 Catholic Encyclopedia attributing the book instead to Roger Bacon.  I haven’t the faintest idea what the Official Opinion of the Catholic Studies Department is on this Rather Trivial Question.  Anyway.)

St. Albert’s theory (or Bacon’s, if you swing that way) was that God directly ordered the higher spheres of cosmos (remember, we are dealing with medieval astronomy here).  As He ordered them, His influence touched and passed through their celestial corporeality.  This then came to Earth in the form of visible light.  This filtered divine influence could have influences on the human body, in the form of stimulating physical impulses and appetites.  Under Albert’s theory, free will was preserved, because it still belonged to the soul to choose whether to obey those appetites.  Since most people follow their appetites rather than God’s will, however, astrology was therefore a pretty decent predictor of what people would do next – not an ironclad oracle of a predetermined future.

So St. Albert’s theory of astrology was not really heretical.  It was just wrong.  Great scientists are often wrong.  It comes with the turf: Sir Isaac Newton actually believed all that Sorcerer’s Stone stuff.  (Also bloodletting.)

Sure, the chapel is dedicated to St. Albert, and there is a statue of him in the front.  The statue, incidentally, bears the partial Latin text of Isaiah 8:1: “Take thee a great book, and write in it with a man’s pen” (Douay-Rheims translation) – a fitting text for a man as prolific as St. Albert.  But if you start looking at the rest of the stained glass windows, you wouldn’t be the first to start scratching your head, wondering what you’re missing!

The Center for Catholic Studies was actually quite lucky to get stained glass windows at all.  They’re insanely expensive to produce.  Fortunately, just as the 2009 Sitzmann renovation was under way, a Catholic church in Boston, one of the old “ethnic” Catholic parishes that have been consolidating all over the country, closed its doors for the last time, and its stained glass windows were put up for sale.  The parish happened to be French, and there was only a limited selection available.  From what remained, Catholic Studies selected four saints who, taken together, seemed to represent the Center’s vision for the Church most excellently.  And so the Albertus Magnus chapel is smiled upon not only by St. Albert, but by the great Catholic thinker St. Augustine, the great Catholic statesman St. King Louis of France, the great Catholic woman, warrior, and martyr St. Joan of Arc, and the voice crying out in the desert himself, St. John the Baptist.

Still, the chapel is ultimately dedicated to Albertus Magnus, and this represents an important milestone for the St. Thomas community.  For many years, two buildings stood sentinel over UST’s famous Arches: Aquinas Hall on the left, dedicated to philosophy and the liberal arts; and, on the right, Albertus Magnus Hall, dedicated to the natural sciences.  In the year 2000, three years after the science departments moved into the shiny new science buildings on south campus, Albertus Magnus was heavily renovated and rededicated as the John Roach Center for Liberal Arts.  This continued a St. Thomas tradition of naming (and renaming) buildings after past and present Archbishops of St. Paul, but St. Albert, the very teacher of the saint who lives at the heart of our university, was lost to the campus… until Albertus Magnus Chapel was finished and dedicated in Fall 2009.

We firmly pray – and have good reason to hope – that St. Albert will not insist on matching stained glass windows before providing his intercession. 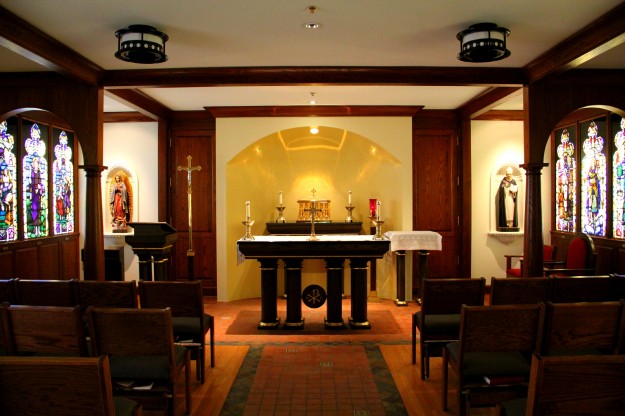